“Uber is like Google. The one that captured everything: most drivers and customers. All other apps live in its shadow. » For Yassine Bensaci, vice-president of the VTC association in France – the main representative of VTC drivers in France – the observation is clear: Uber is the undisputed number one in the world. Even the biggest players hardly compete with the San Francisco giant.

Like Lyft. The American company is struggling to resist the attacking power of Uber, despite the turnover of nearly 1 billion euros in the third quarter of 2022. But the group is losing ground. Its losses amount to 391 million euros at the end of 2022, instead of nearly 90 million the previous year. The other big VTC is China’s Didi. A flagship of local technology, the group was severely slowed in its development by sanctions from Beijing because it had tried to go public on Wall Street. Sanctions that prevented him from attracting new users for more than a year. After paying a $1.2 billion fine, Didi was only able to reopen its platform to new customers this week.

Only Europe has been able to impose players capable of creating some competition for Uber, without ending its supremacy. The Estonian Bolt, the German Freenow or the French Heetch have managed to settle over time. “In France, Uber represents 60% of the market, when Bolt is at 20%, Freenow and Heetch rather at 10%”, summarizes an expert. Despite this dominance, these players are stepping up their efforts to gain market share.

They are also based on other activities parallel to VTC

“We aim to catch up with Uber,” even assures Julien Mouyeket, the general manager of Bolt France. Created in 2013, the Estonian presents itself as the main outsider in Europe, with a presence in 46 countries and 400 cities. Bolt is even more developed in France than Uber, with a presence in 28 cities (26 for Uber) and aims to have 32,000 drivers from the first quarter of 2023, that is, as many as the Californian. It must be said that the group has the means for its ambitions, having raised more than 1 billion euros in the last two years. “We’ve relied heavily on promo codes to attract users quickly, explains Julien Mouyeket. Our cost structures are lower, with a team of 4,000 employees worldwide” (30,000 in Uber). 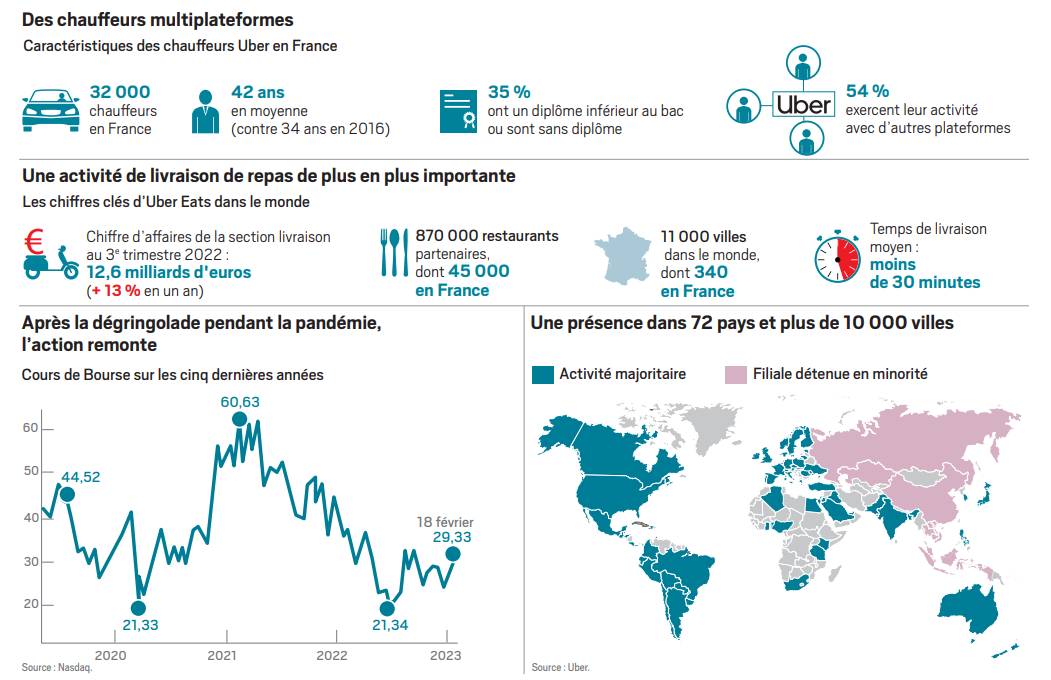 Reservation of taxis, scooters and electric bicycles, car sharing… Like Uber, these players also bet on other activities alongside VTCs. This is notably the trademark of Freenow, which is born out of a collaboration between BMW and Mercedes-Benz and wants to create a “super-mobility app”. “We are leaders in Europe in the mobility offer together with 430,000 vehicles available”, has Parfait Bazebi, director of the group’s French operations. The German company intends to go further by considering integrating the payment of public transport into its offer.

Ambitions beyond the means of the French Heetch, present in ten French cities, mainly in the suburbs, where the VTC offer is less strong. Going where others are not, this strategy allows the tricolor start-up to continue to exist, when many players have disappeared, due to lack of profitability. “It’s the way to go up against big, better-funded players”, welcomes Teddy Pellerin, CEO of Heetch. The company has adopted the same method to develop abroad, targeting French-speaking Africa, a region where neither Uber nor Bolt are present. “The African market has become bigger than Europe in terms of travel volume”, the leader now assures. In the face of an omnipotent actor, standing out has become a matter of survival.

Pension reform: it gets complicated for the government in the Assembly

Pensions: Franck Riester admits that women are “a bit penalized” by the postponement of the legal age

Suffering from a corneal disease, swimmer Yohann Ndoye Brouard got revenge after his accident at the Olympics.

“The Graveyard of the Sea”: Aslak Nore, a Norwegian author to follow

Politics75World59ENTERTAINMENT36Economy22Sports13
Previous articleIsrael: More than 100,000 people demonstrate against Binyamin Netanyahu’s projects
Next articlePension reform: the RN calls for the bill to be submitted to a referendum
Economy

Discover the future of news with our innovative website. Our team of expert journalists bring you the latest and most relevant updates from around the world, covering politics, business, sports, technology, and more.